AUDUSD: Back in Black

The coming nights see two key moments for Oceanic Countries: the RBNZ Monetary Policy Announcement and RBA Governor Philip Lowe’s speech will both be carefully examined by investors and economists as they attempt to forecast the future monetary policy and interest rates of Australia and New Zealand’s Central Banks.

The two statements come at a key time for the global economy as it is dampened by the effects of the corona virus outbreak: a slow Chinese economy and worldwide financial anxieties.  Subsequently, the New Zealand and Australian Dollar continue to lower but until where? The current pattern certainly validates Marty Zweig’s famous quote “The Trend is your friend”, but an end to said trend is inevitable.

In our 2018 Long-term expectation on AUDUSD, we were following the bearish Trend started in 2011 towards 0.6750/0.6580 which corresponds, among other elements, to a key graphical support line as shown in the AUDUSD’s Monthly chart here below. But what should be expected now that this area has been reached?

Several technical elements are converging to suggest a bullish reaction above 0.6580. First, as mentioned above, the median line of a descending channel from the 90’s is supporting the market now and our weekly mathematical indicator is back on a graphical support line which has provided good signals in the past, these elements advocate for a recovery move from 0.6580 in the direction of 0.7020, the mean prices are illustrated by the 89-Week moving average.
But the Australian Dollar does not evolve in a vacuum and is highly dependent on other commodity currencies, this should take place alongside a rise in the currency of its neighbour, New Zealand, which should hold above a support level at 0.6335 this week and a drop on USDCAD below 1.3350. Oil and Copper are also in the game to reverse to bullish but this has been already mentioned in a  previous article! 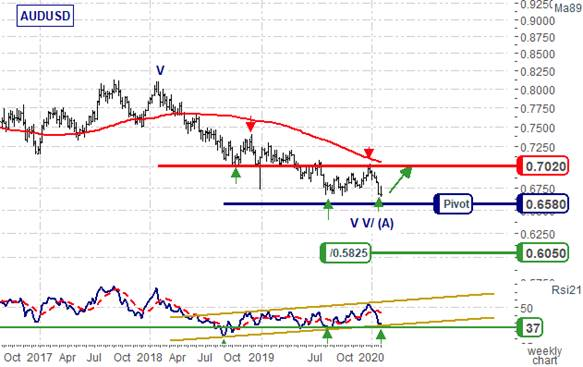 THE END (of the bearish Commodity Currencies move)

Prev Previous insight A Look Back: The case of the hungarian forint
Next insight European Stocks rally has arrived! Next

What FX Trade to play in the Yen space

Thanks to BBSP's multi-horizon approach and offering , we are able to provide unique, actionable trading opportunities from 6/12 month horizon down to intraday... Lets take the AUDJPY...

BBSP has just published our 2021 Trend views highlighting our key ideas and top trades for this first semester of 2021...

Focus on a post-Brexit Sterling

BBSP has just published our 2021 Trend views highlighting our key ideas and top trades for this first semester of 2021...

Many clients are asking us... So what of the post-Brexit British Pound?